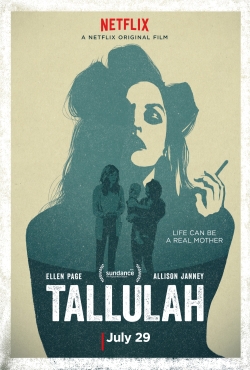 Movie three in our Films about Fuck Ups series (although we’ve talked about how that might be problematic, see previous disclaimer), and I’m going straight in this week with little introduction.

Mainly because I’m PMSing and Jess just left Rory in Gilmore Girls and I have half an eye on that as I type this. Sue me.

IMDB Synopsis: Desperate to be rid of her toddler, a dissatisfied Beverly Hills housewife hires a stranger to babysit and ends up getting much more than she bargained for.

Lu (Page) lives in the back of her van, forages for food to survive and has an obsession with gravity. She also has a boyfriend, Nico (Evan Jonigkeit) who one day, after two years on the road (and since he saw his parents), suggests that they head ‘home’.

Lu doesn’t take kindly to this idea, considering her way of life and her immediate environment her home. The next morning Nico is gone. Desperate to find him, Lu (full name Tallulah), heads back to NYC where she knocks on Margo’s door (Janney). Margo is Nico’s mum and she has no problem turning Lu away from her plush apartment, disturbed by her appearance and request for money.

During a stint pinching leftover room service from a nearby hotel, Lu is accidentally mistaken for a staff member by a guest. That guest is frazzled Carolyn (Blanchard) who seems to be in the midst of a breakdown. She’s also the mother of a one year old, Maddison, and she’s drunk in charge of the kid. Trusting Lu’s face, she persuades her to babysit Madison while she goes out to bang a man who definitely isn’t her husband.

This decision proves to be the biggest mistake of Carolyn’s life when Lu takes the baby and rocks back up at Margo’s, claiming the baby is Nico’s. Thus making Margo reluctant grandma. The story won’t take you any place you’re not expecting, I’ll say so here.

Margo is skeptical of Lu but slowly the two of them bond, with Lu opening up about her own sorry life. Margo herself is going through a divorce from her husband Stephen (John Benjamin Hickey), who has left her for another man (Zachary Quinto) and feels she has no control over her own life. Lu, too is obviously damaged and struggling with ‘motherhood’.

Meanwhile, Carolyn is forced to reevaluate her life choices, whilst handling the judgement of Child Protective Services, the police and her husband.

An awkward dinner party at Stephen’s and a chance sighting by a frantic Carolyn brings the entire farce tumbling down but how can this possibly turn out well, for any of our characters?

Will Carolyn get her baby back and become the mother she needs to be? What about Lu? Will Margo get her son back? Can or will she ever forgive Lu for what she’s done?

And, importantly, will you care about any of these super damaged characters?

(My money’s on perhaps).

I don’t feel much sympathy for Lu but I think that’s down to my own prejudice against Ellen Page. I don’t like her and find her a little precocious (hangover from Juno?). Lu is a selfish woman for her own understandable reasons. Her lack of polish I suppose is quite satisfying to witness, however I don’t like her character either. Lu’s justification for taking the child is weak too, though I understand it’s supposed to be a split second decision that changes all their lives forever, and maybe when all is said and done, for the better.

Alison Janney is wonderful (well duh), portraying Margo as a deeply sad individual. When her turtle dies and she sobs openly about her loss, I really felt for her as she knows only too well that she’s let herself slip into her current position and is struggling to move on.

The arrival of Lu ignites something in her, even if it is only the fact that something different is happening finally. That it could lead her back to her son is a bonus.

If I’m honest, the only character who really made me feel anything real, besides Margo, was Carolyn. Sure, she’s does lots wrong and doesn’t she know it? I really appreciated that this film is about making mistakes and then owning them, and desperately fighting for an opportunity to rectify them.

I think this film is about forgiveness and understanding, and in the end demonstrates that sometimes a really bad act, perpetrated for a well-meaning reason, shouldn’t be punishable forever.

Although I’m not wild about Page, this is a femalecentric movie making interesting points about what it means to be a mother, and a child . The men in this couldn’t be more secondary, from Nico and his father, to Carolyn’s cruel husband, to the concierge in Margo’s building. And I liked that. I liked that a lot. (Tallulah scored big on the Bechdel Test, naturally).

It was quite slow in places, though the scenes with Carolyn were electric, she was really great to watch. The use of flashback was quite effective, though it didn’t give me back story on anything that made me empathise more with Tallulah, sadly. I want to come out of this thinking, Page is good and you know something, she’s fine really, just empty to me.

My Rating: 3.5/5. Some great points and performances, but overall dragged down by the slower moments.

Did my beautiful wife love Tallulah like Ellen Page loves annoying me? Or was she more inclined to go on the road for two years just to get away from it? Find out here.