Skip to content
Jill and I hashed out our new theme via Google Hangouts the other evening, whilst we were moaning about our busy weeks. “Films with Colours in the Title” was one of mine (it might come back one day, don’t worry), though I couldn’t think of much beyond Black Hawn Down to reinforce my case. (As it happens Blue Ruin, Green Room, Three Colours: Red (and Blue and White) spring annoyingly easily to mind when I have no pressure to come up with them).

Luckily, Jill touched upon “Films about how much adulting sucks” which then evolved into its working title “Films about Fuck Ups” which I’m sure we’ll all agree is much catchier and pleasurable to say.

So, to Films about Fuck Ups Month.

DISCLAIMER: The first pick of the month looks at mental health issues and, although, we’ve included it in our new category, we’re not implying this makes a person a ‘fuck up’. To be clear the term in this case is about anti-heroes and underdogs, and very much tongue-in-cheek. You get me? Just to be clear.

IMDB Synopsis: When Alice Klieg wins the Mega-Millions lottery, she immediately quits her psychiatric meds and buys her own talk show.

Alice Klieg worships Oprah and has one of the very best movie wardrobes I’ve ever seen. She also has her own issues which we’ll very much come back to.

Alice it turns out has a personality disorder and is a fan of prepared statements, which should actually be a thing. I would be a lot more eloquent if I could pre-prepare everything I said. She has a tight circle, which include her best friend Gina (Cardellini), elderly parents and ex-husband Ted (Alan Tudyk), who clearly care for her.

She also has Doctor Moffet (Tim Robbins), though on beginning her new phase as ‘Million Dollar Alice’ she tries to quit his sessions. It doesn’t stick but might give you a loose idea of where Alice is heading.

Alice moves from her apartment into a new complex within a casino and somewhere along the line is inspired to pay for her own show on local TV. She meets struggling co-owners Gabe and Rich Ruskin (Bentley and Marsden) and their team, which includes Dawn (Cusack) and Deb (Jennifer Jason Leigh), who aren’t that into the whole concept (though because they think Alice is a nut job, not because they have any concern for a clearly vulnerable person) .

Alice’s plan is to present one hundred two hour episodes of ‘Welcome to Me’ a show about herself and her life. This comes at a great price for her financially, and emotionally when it really comes down to it. And with Alice throwing much needed money at the floundering local station, her new team have little choice but to get on board. What Alice wants, Alice gets becomes the rule of thumb – and it’s unclear how this vanity project could ever be a good idea.

Alice starts a sexual relationship with Gabe alongside the show and things get a little weird as he seems as fragile as she does. The show becomes something of a cult success, as Alice splices awkward cooking sessions (hamburger cake, anyone?), re-enactments of traumatic adolescent experiences (with actors playing ‘Alice’ and her peers) and as the show continues, the segments become more controversial (you’ll see).

Amid the cult success, our heroine stops taking her meds, upsets some people close to her by airing their laundry (and her own) live on air, ups the drama on set (live castrations, yo) and things quickly begin to unravel, for her and the station.

Things start to spiral further downwards when Alice has an accident on camera and then a significant argument with Gina, who calls her a bad friend.

I think the beauty of this movie is in its subtley and in the unfettered subject matter presented by Alice, as well as Wiig’s central performance. I don’t want to spoil it for you by laying it all out but as with all things, something’s got to give before Alice finds herself in real danger.

Will Million Dollar Alice get the help she really needs? Will she repair the damage done to her relationships?

Where can I get a giant swan boat and where does Alice shop? Some of these questions will be answered along the way. 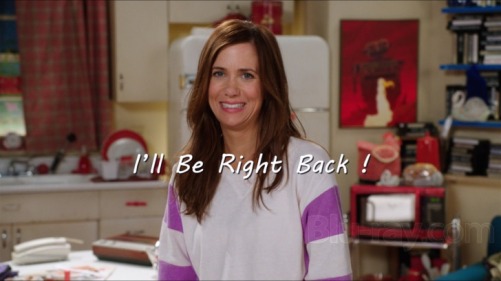 It would be interesting to see this film with a different lead actress because I don’t think Alice could be delivered as well by anyone other than Wiig.

She isn’t a likeable character and her dead pan delivery of almost everything makes her unsympathetic mostly. However, I loved seeing a character like this on the screen. She’s so free in how she speaks, un-encumbered by political correctness or what is expected of her as a person, and it’s refreshing.

Even though she has a mental disorder she is held accountable for her actions and I think that’s good. Gina isn’t afraid to call her out for being self-absorbed so it feels real. A tale about a woman with a real illness learning how to cope with relationships and life in the real world, even if her real world is currently anything but ordinary.

It is uncomfortable in places to witness so many people taking advantage of Alice, financially and otherwise. Alice is a sexually forward woman who knows how to tune into that side of herself, and that is great though it’s kind of sad that nobody seems to care about her emotions. Gabe maybe, who admits to ‘loving too much’.

All in all I think this is interesting, maybe a little slow in places but the show segments make up for that. Alice’s flashbacks are hilarious and awkward. Joan Cusack is boss af, Jason Leigh is prickly and great – the cast is a great one actually, even James Marsden’s slippery Rich isn’t horrible.

Definitely worth a watch.

What did my Qween Jillian think of this?  Would she be a regular viewer of Welcome to Me or would she rather castrate a dog live on television? Find out here, yo.

It’s 2016 and I’ve just been to see a Ghostbusters film. What is this madness?

A lot has been made of the decision to “reboot” such an 80’s classic and with an all-female team of ghost hunters no less. If we’re frank, most of the comments about its impending release have been negative, or at least these are the easier ones to remember.

The die-hard Busterites have been up in arms about their beloved films being tampered with in any way which I understand, yet it’s very hard to separate this train of thought from that of the misogynists who can’t bear the thought of women in any context other than draped over the bonnet of a car or making a sandwich. That’s before we even think about the racial slurs against Leslie Jones, whose only crime in life was to take a role and not be white.

I’m only touching upon this stuff because I want to focus on the way the film made me feel but the way Leslie’s been treated is appalling. And while I doubt justice can be served to an army of cowards hiding behind their keyboards, I hope she’s engulfed in love and continues to feel great pride in what she’s accomplished with this film. Because it’s fucking ace.

I’m not reviewing in the traditional sense, nor giving anything away because that would be foolish. I hope everyone goes to see this film, even if they have misgivings because it has been joyful to tap back into my childhood for a few hours. As with the whole Pokémon Go phenomenon, I think we’re learning recently that there’s a huge space in our lives reserved just for nostalgia. I blame Trump, British Politics and all the violence in the world, in no particular order.

But to the film. If I were asked to review in just three words, I would say:

I did. I smiled like a dufus from beginning to end and threw my head back to laugh out loud a hundred times. Sure, sometimes I was guffawing at a fart joke but what else do you need on a balmy Hump day evening?

The writing overall is very strong and of course it is, it’s written not only by Paul “Bridesmaids” Feig but also Kate Dippold who has Parks & Recreation (2009) and The Heat (2013) under her belt. It is a female-centric film with gender reversal very much at the forefront but it’s done well and is never mean or dismissive. 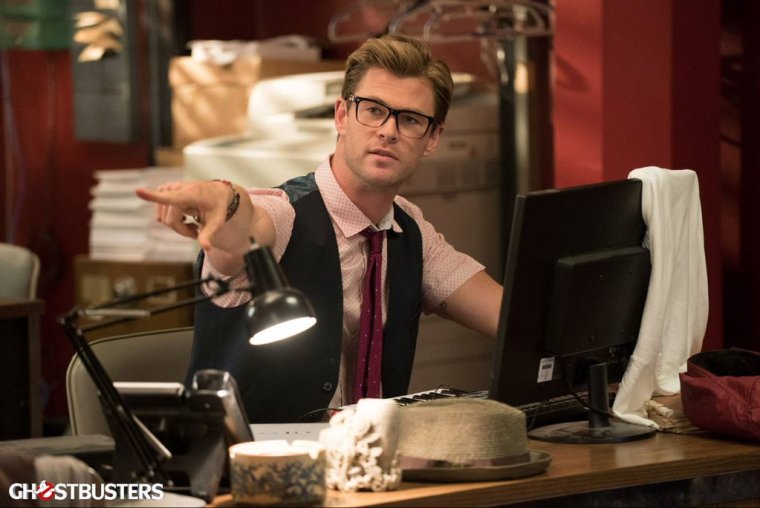 Chris Hemsworth‘s Kevin the Receptionist for example is objectified to the hilt but in the nicest possible way and even though his prettiness far outweighs his intellect, he never feels 2D and that’s skillful writing if you ask me.

The ladies are spectacular and I have huge affection for each of them. McCarthy is gorgeous, Jones is hilarious and wonderfully expressive. Wiig brings vulnerability to the role of Erin Gilbert while making me really buy into her childhood history with BFF Abby Yates while Kate McKinnon, lovely, lovely Kate, adds an injection of kook to engineer extraordinaire Dr. Jillian Holtzmann.

Holtzmann, FYI has caused the internet to implode with lust, as gay and heterosexual women the world over are crushing hard all over her character. While her sexuality is not openly stated at any point, we’ve given enough material to reach our own conclusion. My conclusion is that it’s fucking awesome to see four interesting woman helm a movie without a sniff of patronising love story on the horizon. In fact, scrub that, the love story is about their unswerving loyalty to one another.

Twitter also remarked that this is probably the first film you’ll see that doesn’t make you feel bad about your body and it’s true. I loved seeing big bodies onscreen and I, for one, am stoked Melissa McCarthy is out there being an attractive, sexual and funny fat woman who gets shit done while being someone I can identify with.

(Also, two posts on this blog mentioning Kristen Wiig and McCarthy in a row. You’re welcome).

Honestly, I’m not here to criticise this movie in any way, I’m just not going to do it. The effects take me right back to 1984, the acting is hammy where it needs to be (the main villain) and the music, oh god that theme – it’s still everything. The cameos were also fun but I don’t want to spoiler them.

I’ll sign off here just by saying that I’m glad this is such a strong film. Those haters are going to hate regardless but I’m delighted it touched me the way it did. So far I’ve heard nothing but praise for these modern-day Ghostbusters, which was respectful to its forefathers by taking its own path and I’m closing my ears to anything but because I don’t care.