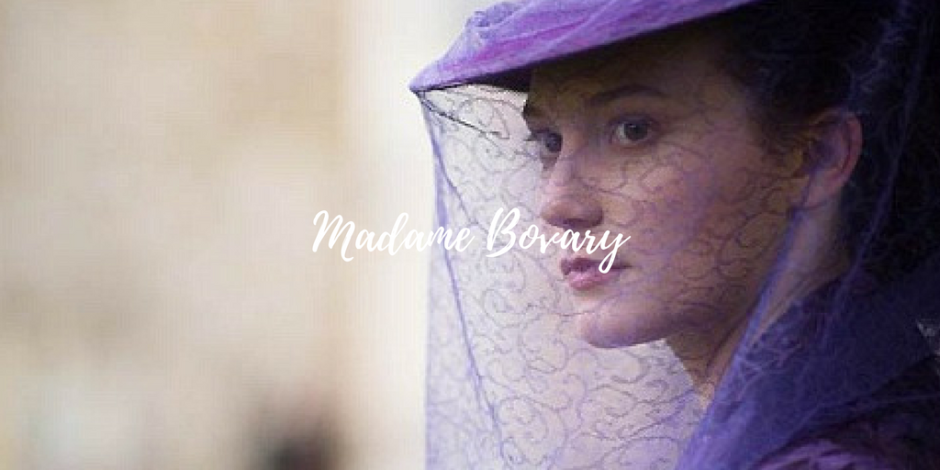 Jill and I are trying something new this month. Picking films that remind us of each other. Which is harder than you think, even when you feel like you know the other person pretty well, even when you have similar tastes.

Ideally I would have found a film that combines our love of sharks and lesbian sex workers but until Mega Shark Vs. Mecha Margaret is made (and it needs to be), I’m shit outta luck. Instead I’ve tapped into Jillian’s love of period dramas and literature (‘cos she’s a librarian, innit?) and chosen this one. I know, right, I’m a genius.

The fact it stars some of the most exciting actors of our generation (Ezra Miller, Mia Wasikowska) and is based on one of my favourite books has nothing to do with it, I swear!

Bored in her marriage to a country doctor and stifled by life in a small town, the restless Emma Bovary pursues her dreams of passion and excitement, whatever they may cost.

A lifetime ago a guy I worked with gave me a dog-eared copy of Madame Bovary and said that I reminded him of Emma. I thanked him, not knowing the full story yet and that was that. Until I read it. That comparison had not been complimentary!

I’ve since revised my feelings on this, as I’ve got to know myself better. I do see myself in Emma Bovary in a very profound way, good or bad and I think it’s okay. It’s human nature to want more from life and although she’s an extremist in many ways, she’s an intriguing character and I love her.

“I will not remain inert, standing in a fever of despair.” ~ Emma Bovary

Emma (Wasikowska) has just been married off to the handsome Doctor Charles Bovary (Henry Lloyd-Hughes) and although the union seems initially promising, it soon transpires that the new bride has a lot expected of her by way of customary behaviour.

The Bovary’s home is a pretty one but it is modest (not by my standards obviously) and Emma seems initially let down by the prospect of her new life here. There’s only so much plink plinking on the piano and needlepoint a person can take. The Doctor is largely absent, both physically and emotionally – and it doesn’t take Emma long to cast her gaze outward.

To begin her desire for something greater manifests itself in her shopping habits (I hear you, girlfriend). When the slick Monsieur Lheureux (Rhys Ifans) comes a-knocking with his fine Parisian wares, promising generous credit, what’s a bored woman to do?

From here, Mrs B’s wandering eye finds itself trained on young idealist Léon Dupuis (Miller) who waxes lyrical about travel and his love of music. Literal heart eyes are exchanged but when push comes to shove, our heroine cannot see it through and rejects him. Which sees Dupuis fleeing from their small town and onto better things presumably.

Dismayed, Emma focuses once again on material possessions and doing up the house, accepting more and more credit from Lheureux. Meanwhile, Charles either doesn’t notice or chooses not to and Emma is left to her own devices. When she meets the dashing Marquis d’Andervilliers (Logan Marshall-Green), sparks fly again for our caged bird – and an affair begins (but only after he pressures her into it first. RED FLAG, Ems).

Drunk in love (or lust) and with fantasies of a richer lifestyle, Emma plans to run away with the Marquis but predictably, at the nth hour, he loses momentum and abandons her instead. Because MEN. Emma is beside herself and you guessed it, shops her cares away.

A chance meeting in the city brings The Bovarys and Mr Dupuis back together, and now much worldlier after her first affair, Emma manipulates her way back into Léon’s heart. Charles trusts his wife so sees no harm in leaving her in Dupuis’ company overnight and that proves a mistake for all parties involved.

Meanwhile, debtors are calling on Emma and she is struggling to keep her affairs both in order and secret from her husband. Charles’ father dies and leaves him a considerable nest egg, which Lheureux suggests could be the answer to all her financial woes. Emma’s not so convinced and goes to the Marquis for money, which he refuses her.

Léon too starts to regret his part in this romance and, choosing his career over his mistress, leaves Emma again. Caught up finally in all her lies, Emma takes drastic action. If you know the story, you know.

Goddamn it. This could be my life story. You know, without all the sexy liaisons and needlework. I love my life but have the worst shopping addiction – although it’s more or less in check now – I have definitely sought solace in new things to add colour and magic to my life in times of stress and uncertainty. Emma’s motivation might be more extreme than mine but she definitely exists within me.

This film looks good, Mia’s central performance is great but it’s a little lackluster if I’m honest. The costuming is sumptuous too. That purple ensemble Emma wears to a funeral is rocking. But the movie itself didn’t set my world on fire.

I think this story is very dismissive of the female right to have her own dreams. Emma is cast as the villainess of the piece for her selfish actions but I don’t see her that way. She’s not particularly likeable maybe but FFS what was she supposed to do? Pretty sure I’d be doing the same if I wasn’t afforded the freedom I have to do whatever the fuck I like.

How did Jillian feel about this period piece? Would she rack up debts just to impress it or jilt it? Find out here of course.