Write about your first sexual experience (via Writing Exercises)

My first sexual encounter wasn’t all that but, as is often the way, I have been left with a great story to add to my box of memories which sees itself rolled out when the vodka is flowing and the tone has been lowered.

Something you might not know about me: I love talking about sex.

People can be very prissy about it but it’s only natural, right? I don’t think I’m a lewd girl without class but I enjoy penis talk and a girthy range of other saucy topics. So sue me.

I was a late bloomer. Not for political reasons. I was just terrified of the idea of ‘doing it’ and the male form, and crippled by my own inadequacies as a ‘woman’. My classmates were happily sowing their oats and taking the piss out of all of us Virgins, pondering whether we might actually be ‘lezzas’ and making us all terrified to even glance in the general direction of someone of the same sex.

For about twenty minutes I sat and thought about whether I actually might be into girls but I figured in the end that my fascination with the more exotic of my species was down to the comfort in which they strode about in their own skin. I liked boys anyway and wanted one for myself, if I could only muster the courage to touch one.

I was eighteen when I finally got to the stage where I thought I could shrug off the taboo of still being chaste. By then my friend Lucy and I were going up to London every weekend and going to clubs, being bad girls. We met some boys (I say boys but my boy was 24) and started to spend time with them, sometimes sharing their spare room if we missed the last train home, which we always did.

Through these boys I met Marvin. He was quite the alluring prospect with his tight dreadlocks and beautiful dark skin. I wasn’t all that romantically inclined but he liked me, smelt nice and hey, if it all went wrong I didn’t have to see him again. Tactics, my friends even at that young age.

We arranged to meet and by chance, Lucy had also lined up a date for the night, so we booked into a B&B in South London. We went for drinks then went our separate ways, Lucy to the boudoir with the boy she’d met in the Wimpy, me with Marvellous Marvin.

I lied about my experience, scoffing convincingly when questioned about whether I had had sex before. This perhaps worked against me in the end, since he took no prisoners if you know what I mean.

When the deed was done (hours later), he got up, told me he had to go back to his girlfriend and asked me for cab fare. With a smile that may or may not have contained a gold tooth, he was gone.

I wasn’t even mad. He’d served his purpose and when he asked to see me two weekends later, I ignored the message. All I really remember now of that event is the morning after, walking to the tube with an ache where you’d expect an ache to be after being thrown around all night like a rag doll. It felt like adulthood.

I didn’t have it off again until two years later, and that time I got my little heart shattered.

But that’s another story.

My name is Mrs Bee and I’m a Beardoholic. 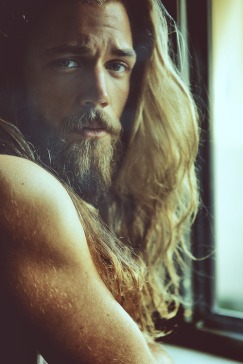 Yeah I know, right? Big wow. Every hipster and his mum is sporting glorious facial hair these days and there is no shortage of female attention buzzing around them as a result. The beard is having its moment and who knows where it will end, if indeed it ever does.

I hope it doesn’t because I get a case of the weak knees most days as I browse the fruit section in Morrisons and a rough and ready Ricki Hall-alike bumps into me whilst squawking into his phone. That chin mane has given him an edge that he probably doesn’t deserve but I can’t be mad at him. He’s seen his window and has the ability to grow a garden on his face, good luck to him I say.

So where did this sudden obsession come from? I know I have always had a weird childish theory that you can always trust a man with a beard.

Ghengis Khan, Charlie Manson and Rolf Harris (say it ain’t so!) have so far proven me wrong on that score, but my prepubescent self longed for a bearded father figure to come along and give me all the answers. Growing up without a Dad around has surely set a precedent for me, take that as you will.

I think all my life I have secretly been dealing with Daddy Issues and I don’t mean that in the sinister sense it suggests. I just mean, a few times I have made decisions (bad ones) because I have (wrongly) assumed that certain people will answer the call within. Basically, when I have needed to be looked after, or have a firm hand to guide me, I have looked to somebody older or (seemingly) wiser to help me with that – and it has turned out disastrously.

But that isn’t about beards really, I just wanted to illustrate that I’m a girl who wishes she had her father around but doesn’t and so I believe this is part of the reason I am attracted to men with beards.

My father had a glorious, Che Guevara-esque beard that made him look distinguished and beatnik and mysterious all at the same time. When I grew up, I was sure I wanted to be with someone as wonderful as my dad, who would be capable of making me as happy as he made my mother.

And I am. I really did luck out when Mr Bee came along because suddenly I was hit with the weirdest feeling of all, once the thunderbolt smoke had cleared: pure peacefulness. That’s the best way to describe real love if you ask me: it feels like peace.

Mr Bee is everything my dad was; gentle and interested in new things. Well read. A romantic. All the things I wanted in my life partner and more than enough to fill my heart with a long-term hope that our life will be a good one.

I will say this though, in defense of men who choose not to have beards, or cannot grow them, all those “Real Men Have Beards” type memes that are flopping about the internet: so not cool. Where it’s unacceptable to disparage a thinner woman for not being ‘womanly’, this is the same thing surely? A man is a man is a man – as all women are real women.

What my childhood self didn’t understand is that the essence of man is not necessarily caught up in one aspect of his appearance. Beards are good and sexy and wild to me, but the actual man beneath doesn’t have to scream and grunt to prove his manliness. I may associate a beard with protection and love, but it’s the heart and soul beneath that will prove that.