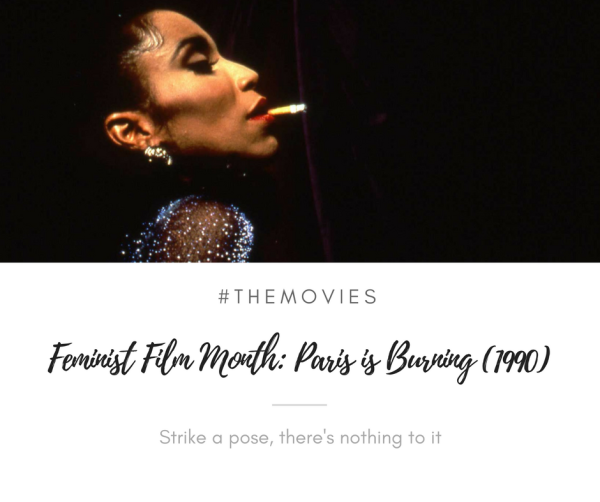 The last movie in our Feminist Film Month (for another year) and we’ve got a special one for you. IMHO, anyway.

Jill and I also accidentally fell in sync on a second movie this weekend, so you can consider this a bit of a double whammy. Why not, eh? (I’ve decided to publish the second film as a separate review because it deserves it, frankly).

First up, our official film of the week.

A chronicle of New York’s drag scene in the 1980s, focusing on balls, voguing and the ambitions and dreams of those who gave the era its warmth and vitality.

Everybody wants to make an impression, some mark upon the world. Then you think, you’ve made a mark on the world if you just get through it, and a few people remember your name. Then you’ve left a mark. You don’t have to bend the whole world. ~ Dorian Corey

Chronicling ball room culture in the mid-to-late eighties, Paris is Burning allows us access into the lives of some of the largest characters in the LGBT community as they compete against one another in various competition categories, including “Realness” and “Best House Mother”. And of course, “Voguing”.

Livingston has us follow a band of central characters as they explain this unique and wonderful culture, the history of the dance craze that inspired Madonna’s 1990 track and a helluva lot more, including the meaning of certain well-loved ballroom phrases. “Mopping”, anyone?

As viewers, or “voyeurs” (more on that below), we get to spend quality time with the “houses”, families run by formidable house mothers. We meet Pepper LaBeija, “the last remaining queen of the Harlem drag balls” and head of the House of LaBeija; Dorian Corey, founder of the Voguing House of Corey; the mighty Angie Xtravaganza, Mother of the House of Xtravaganza, and the Godfather of Voguing (and Madge’s inspo), Willi Ninja.

The responsibilities of the mothers are to nurture and protect younger house members as they “come up” on the scene, feed and provide shelter where necessary, and generally perform the duties of a maternal role model – while absolutely smashing it on the ballroom scene themselves. These mothers are strong, amazing women with a whole wealth of life experience behind them, good and bad, bringing together an entire family of individuals badly let down by their own biological families.

PiB has such a positive vibe but does not shy away from the horror and hardship of being gay/trans and black in America during the eighties, especially at the height of the AIDS epidemic when education and understanding was not as advanced as it is today.

Personal favourites for me are Venus Xtravaganza, trans performer and all round sweetheart who earned attention for her lovable turn in the film but was found murdered in 1988, before it was even released.

Venus’ grisly fate is shocking to me, although it should not have been and it’s this great loss, described by heartbroken house-mother Angie, that really drives home the shitty way in which trans people were (and are still) treated.

Octavia St. Laurent too,  the would-be fashion model is a force to be reckoned with and although she idolises the supermodels of the eighties, she’s far more beautiful than any of them. She also kills the “Realness” category with her feminine looks and stunning figure.

There are many topics covered here: racism, poverty, sex work, sex reassignment surgery, AIDS and homophobia so it’s not all flamboyance and great outfits. It’s by no means fluffy but it is fun and warm, touching and eye-opening – and an absolute celebration of self-expression against the odds.

I believe that there’s a big future out there. ~ Octavia St. Laurent

Once I finished this I couldn’t resist reading up on how it was received on release. It seems apparent that many critics laud this as a thoughtful reflection on race, class, gender and sexuality in America during the 80’s, while others have accused it of being voyeuristic and exploitative.

I wonder how easy it is to get the balance right on a documentary of this nature? Most of the beef lies in the fact that Livingston herself is a white, middle-class woman who has no real business poking around in a world she doesn’t belong in but watching it, I didn’t feel like that. I might be naive, but it felt respectful and kept enough distance from the subjects, who were left to tell their own stories as they saw fit. (This is an interesting article on the debate).

There’s also been some comment about white beauty being held up as the ‘ideal’ and certainly both Venus and Octavia seem drawn to this aesthetic, which seriously sucks. But, despite these criticisms, that have raised some interesting and valid points, I personally thought the film was touching, shocking and extremely enjoyable.

I’ve tried to keep this review a bit vague so you’re inspired to find out about these characters for yourselves but it’s also because I’m very bad at reviewing documentaries. I can say that I’ve come away with a new-found respect for the community, for the loving way in which they crafted this Wonderland for themselves and a real sadness to learn that the majority of them are no longer with us.

Does Jillian want to cast shade on this one, or meet it on the dance floor for a Vogue-off? Find out here.

If you’re into it, swing over and read my second review of the week, here.