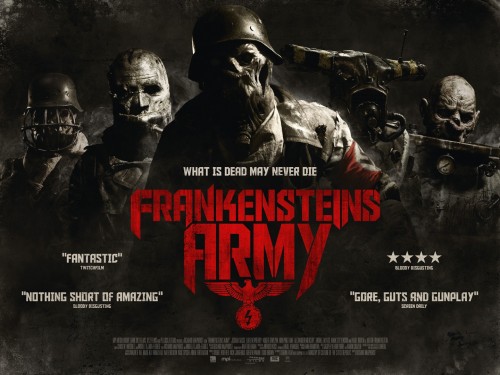 It’s time for the next exciting instalment of Jillian & Christa’s Great Blog Collab 2015 and believe me, this one’s a corker. Our short list is getting ever plumper and more bizarre, which makes me feel very excited about my Sundays.

This week was Jill’s choice.

NB: You know the score re: spoilers. There are some.

Toward the end of World War II, Russian soldiers pushing into eastern Germany stumble across a secret Nazi lab, one that has unearthed and begun experimenting with the journal of one Dr. Victor Frankenstein. The scientists have used the legendary Frankenstein’s work to assemble an army of super-soldiers stitched together from the body parts of their fallen comrades — a desperate Hitler’s last ghastly ploy to escape defeat. (via IMDB)

We start with a home video of a young solider, Dimitri, pledging his allegiance to Stalin. He and his party appear to be going on a secret mission and Dimitri claims to be proud of the fact.

Dimitri appears for most of the rest of the film as a disembodied voice from behind his camera, for he has been entrusted to record the journey for posterity. We meet the other guys through his eyes and they are a rag tag bunch if ever there was one. We are treated to a montage of sorts (love a montage) while the boys take selfies with the local villagers and generally lark about.